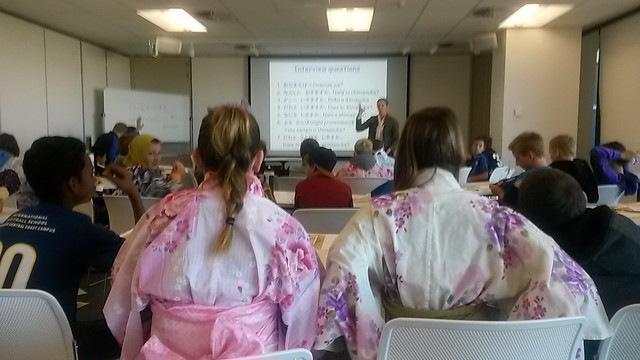 Project Based Learning (PBL) is not founded upon educational theories of play. Over the years I’ve been exploring it, I’ve come to realise that the idea of a (singular) driving question, which is open ended and not easily answered does not readily lead to an end-product that all kids care about, or take pride in. PBL is still a lot more useful than most modernist approaches to cognitive apprenticeships and rote learning however, but it often has to work with the same boundaries. The biggest reason I jumped at the chance to work at the International Football School is that underneath everything it does is play and invention.

My point is that for many kids, PBL does not feel authentic nor is it a universally compelling simulation for the real world. One of the tragedies of the global economy and transmedia childhoods is that culture becomes intentionally invisible to kids, replaced by faux online culture and sub cultures — and not all of them positive.

Take Twitter for example: It’s almost a given that you have to hate on something or someone these days, just as the Big Bang Theory has turned insulting people into hilarious comedy. I am not convinced that Google mediated websites, videos and tropes shine any authentic cultural light on other cultures for young people, and that many depictions of ‘digital literacy’ fall far short of the mark when it comes to solving this. Authentic (to me) means getting as close to the primary source as possible though the media available, rather than letting the media available become the primary source (which is the entire reason Google exists today). Yet, kids are given iPads and told to look things up as routinely as they get a packed lunch.

I do like a good sim, especially if it allows kids to do things in school which would normally be impossible, dangerous or unlikely. Back in 2007, I enjoyed working with global educators in Skoolaborate – not least Kyoto Gardens school in Japan. Even then we had an open, exploratory approach to inter-cultural learning — here’s the PDF of one of those early cross-school events. Remember, this is 2007 and I had kids in a global immersive world project, which now, looking back made Skoolaborate an important part of the ‘game’. Like Second Life, it was perhaps too early, perhaps misunderstood, but never the less achieved a level of cross-cultural immersion that few other projects have achieved since.

My point is that learning is increasingly about cross-cultural experiences, learning about other cultures and traditions because media communications makes us globally connected.

I could not help think about this today when my middle-schoolers spent the day at the Japan Foundation learning about manga and anime. We designed a workshop with them for Japanese Studies and Visual Arts and even had a small grant to develop it. The kid’s really enjoyed being taught by the centre’s staff and it was great to see the pride Suzie took in their ability to interact in Japanese after all her hard work in the last few terms. On all counts, being able to go to a space like the Japan Foundation to celebrate and honour all that work feels really important — far more so that speaking at some edu-muffin event and getting a retweet. Our school might not have a computer lab, but we do have a bus, and access to amazing places like this. Rather than going to see, or looking around, I think that collaborating with organisations to develop cross cultural and cross disciplinary experiences for kids in stage 3 and stage 4 is more important than freaking out and endlessly debating their ‘digital literacies’.

Conversely, JF staff were thrilled to hear kids talk about Sailor Moon, RWBY, Summer Wars and other art we’ve been throwing into their visual arts classes. Even so, I could not really shake the memories from 2007 when kids logged in, dressed up and met Japanese students in a virtual Japanese simulation. I reminded me once again, that being able to connect with other cultures, in their own age group plays an important role in creating authentic learning (the mantra of PBL).

I am sure that we could now use Minecraft for this as it’s cheap and easy to set up, but we’re always going to deal with the time-zone barrier. Its the same with FIFA 15. I’ve thought many times about how I can use this inside the school, but time barriers always emerge around an organised competition. It might work as prelude to a Japan Football Tour … maybe, but at the end of the day, games are timeless and nationless when it comes to play. I think that kids don’t see other cultures though their Google-filtered screens any more than latch-key kids did in the 70s before the Internet and globalisation.

I think that places like the Japan Foundation play an increasing role in education to schools like ours whom want to extend more cultural and personal development experiences for kids — who potentially will be involved in international sport — and are already well aware of the global nature of sport. Anyway, I had a great time today and always love it when I see kids dressing up, trying out things that are beyond their current ability and most of all, finding the cultural relevance to the work back in class.

Lots to think about from today … *thanks to Suzie and Bec for a great day … and I highly recommend the Japan Foundation to anyone else interested in Japanese Culture.

This is 100% the opinion of the writer and does not necessarily reflect that of my employer or anyone else. If you're afraid of opinions other than your own, you might want to skip this.
%d bloggers like this: