Somewhere around midnight yesterday, I updated and revisted Minecraft after reading about the latest updates. I’ve been there before, and to be honest, didn’t put enough time into it.

Let me explain why Minecraft is a breakthough moment in gaming. Firstly it’s really simple, block based, lego-like and very 8 bit nostalgia. Secondly, it’s not just a game, it’s a virtual world where, if you learn to make things (from zero instructions), you can create almost anything in an open world.

But this world is a game, so you can get killed, have to solve problems and receive rewards. When night draws in the world is filled with zombies and other creatures with the single-minded purpose of killing you.

Secondly, it’s multi-player and requires a community to fill the game with meaning. How it works will probably defeat most adults in under a minute. If anything, Minecraft demonstrates, more than any other game – the gulf between how kids (and gamers) solve problems and how the rest do (or can’t).

He’res the thread from Twitter today – there’s no doubt that Minecraft is being seen as a useful game, and perhaps a great way for those on the edge of  “do I?” to jump in.

So Mr5 started playing and was eaten by a zombie. Mr10 informs him, he didn’t build a shelter. I had no idea Mr10 even knew about Minecraft. It turns out Mr10 knows a lot about it, despite never playing it. A salient reminder, kids have declarative knowledge that’s useful.

So Mr 5 asks “whats a shelter”, but Mr10 struggles to describe it in a way Mr5 needs, resorting to grabbing the mouse and showing him. Yet more evidence, that despite never playing the game, he’s sees showing others as the solution, not talking about it.

Mr5 is still a bit lost on the idea, but really keen to avenge his earlier death on a zombie or two. So Mr10 grabs the lego and demonstrates the concept of a shelter. (see illustrations). Now before I sign off this post, let’s look at what just happened. I read something I knew something of and downloaded the game around midnight. Between breakfast and soccer (about an hour) there’s a Twitter conversation. During soccer a bunch of other people have more conversations. When I get back, Mr10 makes a model in a few minutes and Mr5 is zombie proof and asking more questions.

It really makes me wonder how a physical space can ever hope to be as relevant – if what people are doing is attempting to solve problems. Essentially in this case – making sense of what will no doubt appear to most teachers to be ‘stupid’. More importantly, going from ‘what’s this’ to massively productive took less than an hour. Remind me again why people is offices spend months and years debating what it is we all need to do to teach and learn?

Update to this morning’s post: It’s not 4.00pm and I’ve been Crafting most of the day. Getting bored of single player, I’m not hosting the game as a world in a VPN Network of a Mac, so the kids are can now collaborate in one game, not two single players. So after about 4 hours play, Mr10 and Mr5 are now in the same world. 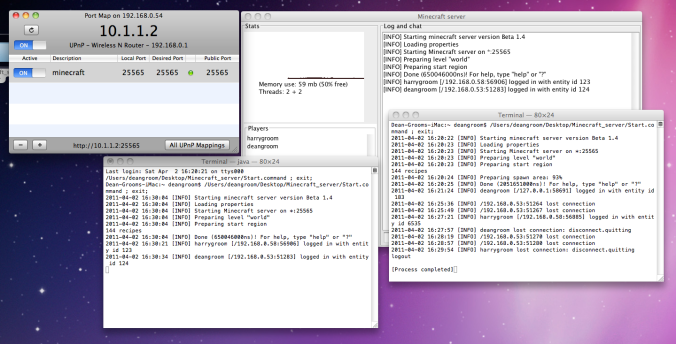 9 thoughts on “How to teach with Minecraft in an hour”